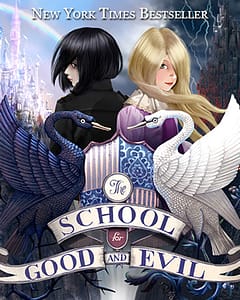 The School of Good and Evil is a fairly popular middle grade story. At first, I hesitated to write a review of it, because I feel conflicted. My warning is that this will not be a cheery review. In fact, I have tried writing this review once before, and got too angry to continue.

There are quite a few problematic aspects of this book. First, though, is the oversimplification of good and evil. I think the author wanted to explore fairy tales and put in a new twist on them. But, the trouble is that his pacing is way off.

For instance, we are told that Sophie is actually “evil,” even though she is certain that she is good. Other characters openly tell her that she is evil. Part of my problem with this text is that a boy is the reason Sophie goes over the edge there.

And, that is such a reduction to evil. I think the novel could have been so much cooler, if it had an exploration of what truly constitutes “evil.” Maybe, the students in the evil school push the boundaries, or go exploring what this “evil” means in a modern setting. But, no, they talk about being hateful (not necessary evil in my opinion) and “ugly.”

If Looks Could Kill

Sophie is presented as a beautiful girl (physically), which is cause for her repeated dismissal from the story as a serious person. Like, she enjoys creams and face masks, and no one shares that interest. Even more bizarre is that she becomes “ugly” with warts and short hair by the time she is fully “evil.”

This kind of approach to female characters (to me) is rather misogynistic and destructive.

Meanwhile, Agatha discovers that she is beautiful just the way she is. Again, why is it so important for the female characters to be beautiful. I think back on Carrie Fisher saying, “Screw beauty. It’s superficial anyway, and my other attributes matter way more than my appearance.”

Indeed, this focus on appearance reduces the female characters. I believe that Sophie was misrepresented. She probably had good reasons to be evil, and she was a good villain who deserved a better exploration of her psyche.

This is middle grade, but in no way should it dumb down its dealings with good and evil, which are intriguing topics, even for younger readers.

Let’s not even talk about how the author repeatedly talks about women who are “not princesses” because they gain weight or because they don’t shave their legs anymore.

This is another problem in the novel: interest in a boy is what drives the story. So, kissing Tedros could lead the characters back home. And, while this is not what happens in the end of the novel, the ending is so rushed and the characters’ decisions make no sense.

The whole time I was reading this book, I was hoping for an LGBT+ character or ship. Instead, all the characters are focused on being at the ball with a boy. And, even then, it is hinted that some boys go together in a mean attempt to avoid choosing girls, not because maybe two boys like each other enough to go to the ball together. No.

What would have been powerful is Sophie and Agatha realizing that perhaps they like each other romantically.

They fight over a boy we know nothing about for 500 pages.

The more I think of this book, the more frustrated I am with it. It took me way longer to read a middle grade novel than the other books I had been reading. I think it’s the pacing. But, it’s also all the things I discussed on here.

Have you read this book or the whole trilogy? What are your thoughts on it? Please share them in the comments! And, of course, please don’t be offended if you liked this book. This is just my opinion and I respect yours.