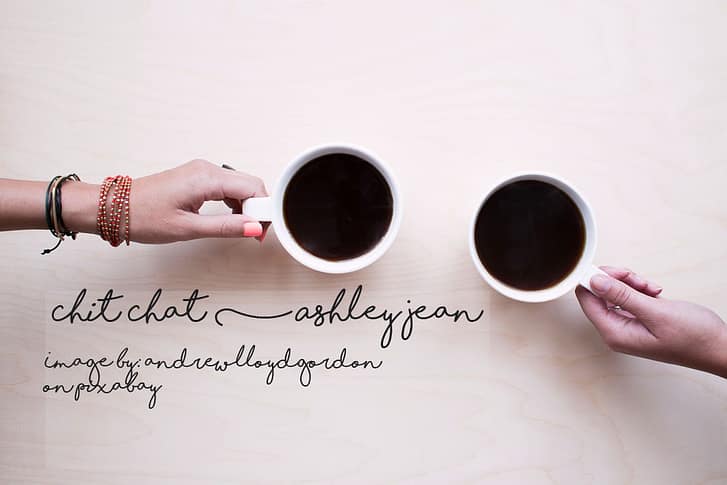 Welcome to my first installment of Chit Chat. In these interviews, I introduce and celebrate influential figures in my own life. My hope is to showcase talented people who are making a difference.

Ashley Jean and I met in college and we have maintained a friendship since then. She is clever, artistic, and creative. I just think the world is in need of her beautiful presence.

Here is my first chit chat ever on the blog, with the wonderful Ashley Jean.

First of all, as a debut author, how would you describe your influences? Are there certain stories that resonate with you?

When I was a young creative writing major in college, I had big aspirations. I wanted to be the female version of Kurt Vonnegut. His writing was extremely eloquent, and quite sad, too. Beneath those humorous lines were some hard truths. I have a similar comedic tone and gravitated towards all of that post-modern writing.
But I’m not Vonnegut. I tried being that guy, and only Vonnegut is Vonnegut. It wasn’t until I read Rainbow Rowell’s Fangirl, that I realized the most memorable, relatable stories are the ones you pull from your core and put on the page. There’s such a genuineness about her [Rowell’s] storytelling, and that’s when my goals changed, and quite drastically. I just wanted to be Ashley Jean, and write whatever Ashley Jean wanted to tell.
This is the kind of female empowerment I like: learning from women, who at the end of the day, want you to be your authentic self.  I couldn’t do that with Vonnegut. There’s that whole “Anxiety of Authorship,” notion. I know Rowell has gotten a lot of flack lately, but I couldn’t have done that if I didn’t identify with Cath.

What was your writing experience like? Did you discover that certain tips work best for you? Is there a routine you follow?

Honestly, the very first fifty or so pages were easy to write. I had a lot of anger and sadness inside of me and diligently wrote as a means of healing. At some point though, those hostile feelings caught up to me, and I couldn’t touch the manuscript. The pain I wrote about was too close to home. But because I knew my writing was important for this community, I followed one rule: write every day.
I participated in NaNoWriMo, and finished the manuscript! Since then, I’ve adopted the 2,000 words a day for 30 days. Every 1K words should take about an hour of your time. Dedicating 2 hours of writing a day, especially when you’re drafting, is key to finishing and having a body of work to edit. This is how I’ve completed two subsequent novels.

Okay, so for those who have not heard about your novel, how would you describe its premise?

Set in the late 90s and early 00s, a young fangirl, Aijae Cruz (pronounced AJ) who has spent of the majority of her teenage and young adult life, learns to live outside of the safe spaces she’s created in fan fiction. In college, she meets a pair of women who thrive on going to concerts, particularly within the emo scene. She tags along on their misadventures and falls in love with the lead singer of famous emo band, Memorable Editions. Martin seemingly falls in love with her, and for Aijae, it’s as if her fan fiction has come to life. But there’s a bit of a plot twist–Martin doesn’t love Aijae and has only wanted her for one thing: sex. Aijae must come to terms with this nightmare, and battle fans, her friends, and herself in order to succeed in becoming the music journalist she knows she’s capable of being. Will everyone else see her that way, or do they think she only gets work by spreading her legs?

Since you are a composition teacher and an artist, would you say that art is a common theme in your work? Particularly for Love from the Barricade, how did you address music as both a fan and an artist?

Definitely! Many of my characters are artists or have some artistic talent to some extent. However, for this novel, in particular, I wanted to make sure that readers knew that Aijae knew she wasn’t perfect, but that neither of the fans who criticize her are, either.
Too often, in most music scenes, women peg women against each other. Women have a lot of rules to follow when it comes to the boys in the band, and I am tired of that notion. If a girl wants to have sex, why not give her the space to have that type of a relationship? Similarly, if a guy in a band wants to have a purely monogamous relationship, why can’t he? Just because he’s a rockstar does not automatically mean he is not human. Does he always have to be portrayed as vagina-thirsty?
If we want to create feminist spaces in the music industry, we have to give people the agency to be individuals. We can’t say every fangirl is a groupie, and that every rockstar is a dick. There’s a gray area. Similarly, some fangirls are absolute jerks, regardless of their size and stature. Not every skinny girl is a “bitch,” or wants to have sex for that matter.
I tried to depict the most common personalities in the industry so that my readers can make a choice as to who the real villain is.

Because I was once an emo music fan, I am curious about what your favorite emo bands were. What was your favorite lyrical witty line that you loved?

I followed Fall Out Boy, Paramore, My Chemical Romance, and Taking Back Sunday on tour the most. These were bands I HAD to see when they came to town. There was no question. I was on that barricade. I’m actually in a Fall Out Boy video and getting hurt on the barricade, but I wouldn’t have had it any other way.
My absolute favorite line is from Fall Out Boy’s “Hum Hallelujah”: “You are the dreamers, and we are the dream. I could write it better than you ever felt it.”
A lot of FOB’s earlier songs had so many messages about writing. I love all of those lines, too.

As an indie author and a person of color, what elements of your own life or your own culture did you incorporate into this novel?

Aijae HAD to be Mexican. And she had to be a Mexican who struggled to find a culture. When you’re a Mexican-American raised in a primarily white neighborhood, you aren’t going to fit in in any of those spaces––Mexican or American. You are going to experience microaggressions from your friends that don’t understand that, either. Let’s be honest–punk rock is very white. But that’s also why the punk rock, emo–whatever scene is such a magical place. Aijae could fit in there if she physically fought hard enough.
I also really wanted to talk about body-shaming in general. I get that skinny is the “norm,” but to say that “skinny bitches” don’t experience shame, bullying, and suicidal thoughts as a result of body shaming, is false. I grew up skinny my entire life and never once felt fucking normal. When I was in college, I was especially ostracized by my friends, and they often put me in situations that felt like hazing and made me ashamed of my body. I won’t wear a bikini. Don’t tell me my stomach is “flat enough”–that’s not the issue here. The world has taught me that bones are ugly, so I’ll hide them when I can.
What I want my readers to know is that despite what “seems” to be a privileged status–reversing it and hating on someone–will never result in the equality we are all striving for. We have to realize when we say hateful things to one another and stop that.

That’s the biggest goal of this novel: is to help women find unity in the music industry. Because right now, there is none of that.

Since this is a book about music, I have to ask, what are your go-to hype-up songs?

Maybe a snippet from the story?

“With age, everyone finds their palate in food, in people, and in hobbies. I’d grown to appreciate adventure in small doses, like driving hours to see a band I’d just seen the night before…”

Where can readers find you on the web?