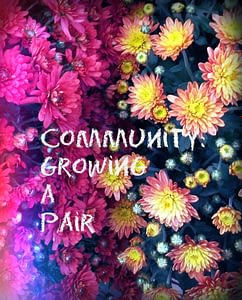 Community is a show that is amusing, sure, but it is also about growth and development. All the characters grow up considerably over the course of six seasons (and a movie?). In particular, characters: Jeff, Britta, Troy, Abed, and Annie develop a lot throughout the series. They grow into their own identities. It’s not always perfect.

Jeff doesn’t quite go down the path we are told to expect of him. He openly admits that he texts all the time yet no one is on the other end. He longs for his father’s attention. He was bullied by Shirley when she was young. He is definitely not the cool and collected person we assume he’d be. He is competitive in the paint-ball matches. He fully embraces Abed’s movies and dialogues.

For his future, he defies what  he’d planned for himself. He wanted to get his old job back, but he’d changed too much. He’s unable to sustain the lifestyle he’d eagerly planned.

When he graduates college and gets his own office, his only case is related to Greendale. The school becomes the center of his world and he can’t get away. It is a community he cannot shake off. He participates in charades within the show. He joins Troy and Abed’s show, their dances, Glee club, the Save Greendale Committee.

Britta Perry starts out as a serious cynic. She is not impressed with the government, or politics, or Jeff. Out of everyone in the group, she is the least interested in connecting with Jeff because she knows that he sees her as a sexual conquest and nothing more. As the show develops, Britta becomes almost a caricature of her old self. Her lifestyle is held together by a facade as her parents are helping her behind her own back for the duration of the show.

She pretends to be a hipster out of choice. For example, she has CD player and knock-off phones. However, the audience learns that she can’t afford to be “cool” (whatever that means). This is presented as an-okay thing to be. It is a relief because, in college, there’s a pressure to conform to the rules of coolness.

This football wonder then becomes attached to Abed. They go on adventures and do things together as much as possible. He goes from being a simple jock to a repairman prodigy. If you thought you saw this coming, remember that he becomes a young millionaire.

Speaking of splitting the unlikely duo, Abed also changes a lot and finds himself throughout the show. He goes from being an isolated person to being part of a pair (whether it’s with Troy, Annie, Jeff, or Frankie). Quite the eccentric, he adjusts to the “real world” as much as he can: by infusing it with his interests in film. He often refers to his friends as characters, often reenacts shows and movies, comments on themes in Community. He goes from being the most obscure and seemingly socially awkward part of the group, to perhaps one of its most promising participants. He is the voice of reason, the meta narrator, and he is in fact what brought the group together. He assembled it. He takes in Frankie.

She goes from being a young girl to an adult. What comes to mind is her appearance. She started out wearing cute dresses and cardigans. Her hair up and pinned, and by the end of the series, her hair down and relaxed, her clothes casual and less rehearsed. She openly tells Jeff to kiss her, not for her sake, but for his. And, Annie is in charge of her life as she interns for the FBI.

–Why Community was Canceled