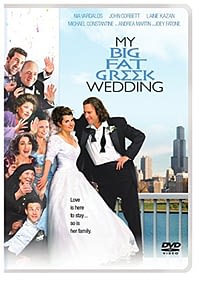 While it is endearing,  My Big Fat Greek Wedding relies on stereotypes to communicate the difference between Caucasians and people of color. It is refreshing to see a family like Toula’s. However, I wonder about the portrayal’s accuracy. As a woman of color, I don’t think the society presented is realistic.
It would have been more convincing to have different kinds of people of color. Maybe some Greeks are not meat eaters  Or, maybe some Greeks don’t over-share. Yes, there are stark differences between cultures, but not everyone within a culture is identical to others in that community. In a way, it is a gloss over all people of color as the “same.” It’s not as complex as I would have liked it to be as a story.

It is still incredible to watch a story with so much diversity and culture. It’s rare to hear the perspective of people of color, without trivializing our views and dismissing them. This is a good start. The film comes from a well-meaning place. It is about acceptance of one’s background, culture, religion, and family. It is about familial love. I enjoy watching Toula get to accept her family and be proud of them. I know for me, it is challenging to be okay with how different we are as people of color.

The cultural norms I grew up with are different from that of my parents, too, and I think this is partially what Toula experiences in both films. She is not like her sister: perfectly Greek. She’s a combination of Greek and American. So, she doesn’t quite fit into the mold of the perfect Greek girl or the perfect American girl either. I can relate to this a lot, because I grew up as a mix between middle eastern culture and American culture. And, even then, I come from a displaced family; wars tore through the routine, which is something touched upon through the character of Mana Ya-ya who is confused by her new surroundings.

Another neat thing to see is Toula’s  growth as a person, as a girlfriend, a wife, and mother. She finds herself in the first and second film. Women are often told that they need to be “pretty” to “get a man.” It is nice to see a story where the characters are focused on more than just marriage. Toula goes to college, the first in her family, and tries to work somewhere other than the family’s restaurant. It’s a reasonable portrayal of the difficulties women of color face when it comes to career-related ambition.

The challenges of gender relations is also refreshing. I like that the women are not presented as quiet shy “things” to be had. They are headstrong sometimes, they are confident and passionate. They’re not overly sensationalized as this exotic different “other,” a refreshing take on people of color for sure. I feel so happy to see such a presentation of a culture so close to my own.

It definitely sends good messages to people balancing different cultures. They don’t have to be at war; they can coexist in the way a person carries his or herself. She is a proud Greek American and this portrayal of a happy, proud and strong Greek American family certainly opened my mind to the idea of being okay with myself as an Arab American and I am grateful for these movies and Nia as a writer because she presents a different voice in a mostly white narrative regarding women (which is often also told by men, unfortunately).