While I did enjoy 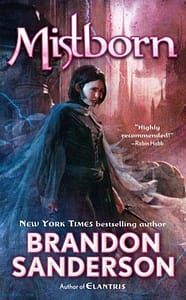 The Final Empire novel, Brandon Sanderson completely blew me away with the sequel, The Well of Ascension. Here, I will gush, ooh, and ah over this powerful story about morality, duty, and love.

WARNING SPOILERS AHEAD. PROCEED WITH CAUTION.

In the wake of the Lord Ruler and Kelsier’s deaths, Vin and Elend are in new positions of power. The son of an abusive and dismissive king, Elend is now an uncertain as an authority figure. With an ominous enemy, armies surrounding the city, Vin is sleepless, restless, and troubled by dangers everywhere.

If I could have a separate series, I would dedicate it to Vin and OreSeur. The kandra who devoured Kelsier’s body has this delicate tension with Vin. It starts out really subtle and then slowly grows to the point of taking center-stage.

The idea of the Contract being such a powerful governing tool for OreSeur felt largely metaphorical. Duty, after all, is the motivation behind many characters’ actions. Vin protects Elend out of a sense of duty. The two of them are so focused on protecting the city that they lose out on many opportunities to speak frankly.

I keep thinking of Tindwyl and Sazed, who are researching myths. Tindwyll, in particular, is governed by duty. She tries to shape Elend into this grand image of a king.

This quote is a summary of their debate:

‘But bad men cannot make good kings.’ Sazed said. ‘It is better to start with a good man and work on the rest, I think.”

First, Vin and Elend, who slowly grow apart as their fears catch up with them. Our heroine, Vin, is overwhelmed with feelings of inadequacy and deceit. She is torn between her true self as someone who has endured painful abuse and her untrue self, who came to meet Elend in her gowns and her beauty.

Elend, on the other hand, is weighed down by his shortcomings as a king. He cannot crack Vin’s safeguarded secrets (cough Zane cough). He is trying to outwit his father and other enemies. An idealist, Elend is faced with the dirty and ugly part of ruling a city. He witnesses Vin in action, killing a man to defend and protect Elend.

The other sad love story is that of Sazed and Tindwyl. Throughout the novel, Sazed deflects Tindwyl’s attempts to have him confess his feelings. Her death brings him heavy sorrow and grief.

And finally, the story between Breeze and Cett’s daughter (Allrianne)  lingers in the background.  One-sided and riddled with Soothing, the story unfolds in an unconventional way. Breeze lives because of Allrianne’s hard work, but no relationship comes to fruition.

Foils in the Well of Ascension novel

I have to gush over the beautiful foiling that Sanderson incorporates in this book.

I don’t think I’ll ever get over Zane’s tension with his brother, even though they never actually talk to each other.