Today, a box of books appeared on o 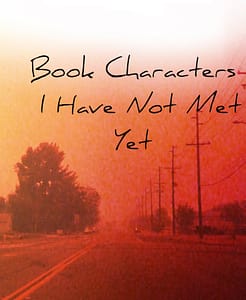 ur front step, which is probably the most exciting thing to happen to me (yet, anyway). I love reading because I get to meet different people and worlds, wrapped in beautiful words like truffles melting on my tongue. Never does it get old and I am happy because I get this opportunity to be introduced and make this life long acquaintance (which later on grows into a friendship/relationship) with lots of awesome people.

So, I decided to list characters I am excited to meet in books on my shelves:
1. The Darkling (The Grisha trilogy).
I love a good villain, especially when they are interested in the main character romantically. Most times, I end up shipping them together. I am just saying this in advance, because I can see myself loving this character so much. I blame Sam from Thoughts on Tomes for making me love this trilogy and world. It is an overwhelming love, I admit, because I don’t know what to expect really. I just hope the Darkling has a big role in the series, because of reasons. Also: Tumblr, where you at? You better step up your game and have mood boards and character castings.
2. Blue Sargent and Richard Gansey III (The Raven Cycle)
I have read two fairy books by Maggie S. They were amazing. I hate to sound like Knives Chau from Scott Pilgrim, but, damn, that woman can write. Beautifully and hauntingly. I just feel incredibly in awe of her talents and her personality. She just has a captivating presence and spirit. It is so cool. Thanks, Tumblr. I already have headcanons and theories about the series (rhyming poet in the house!). Seriously, though, I am ecstatic to have this quartet.
3. Aristotle and Dante (Aristotle and Dante Discover the Secrets of the Universe).
For someone who grew up slashing everyone (because LGBTQ+ was virtually taboo and unheard of in my world), I don’t have enough characters in my world who are not straight. Much to my dismay. I heard amazing things about this book. I don’t like that there’s a second one coming (I know, I am in the minority here. I may be an extinct species at this point). I just like finality in one-shot stories. I don’t like it when authors revisit a world in a series of stand-alone pieces. Like, let it go (Elsa style). Anyway, I already feel attached to these two dude bros. I know I will be utterly in love with their stories.
4. Kesteral (The Winners trilogy)
Did I get her name right? I am not sure. I just love me a character who is not, not a fighter, because, listen, listen, listen, observe: strength isn’t always physical. In fact, sometimes, being clever and emotionally strong can outweigh muscle. And, that’s all I am going to say. Actually: hold that thought, because I want to complain about the new covers that I ended up getting (price is a thing). Why is she brandishing a knife/sword thing? I thought she didn’t fight! That’s the appeal for me, anyway.
5. Main character from The Girl of Fire and Thorns
Because of medications and recovery from ED’s, I have gained a significant amount of weight over the years of my journey with mental illnesses. It is a source of much shaming and embarrassment. I heard that the character in these books is a bigger girl, and that makes me so keen to hopefully have a fictional soul sister who inspires me to be strong and unabashed by my appearance.
6. The Dragon (Uprooted)
Way back when I was in my more hippie times, I used to really focus on mythology. One of my favorites was the Persephone and Hades storyline. Anyway, I feel like this story (along with Star Touched Queen) will satisfy this missing part of my life without me having to read the same boring stories and interpretations.
7. Karou (Daughter of Smoke and Bone)
This is kind of a cheat, but I have read a bit of the first book in this series, and I adore Karou. She’s an artist and her power is just mind blowing. I love the world she lives in, so I can’t wait to delve in and see what will happen. Not too crazy about fallen angels; this should be interesting. Laini Taylor is a crafter of beautiful phrasings and characters. I know that much to be true.
8. Nora and Kettle (Nora and Kettle).
I don’t know if I have mentioned this on the blog before, but I have specialized in young adult literature and children’s literature while working on my master’s degree in literature. I wrote my graduate thesis/dissertation on Harry Potter. So: naturally, I analytically read Peter Pan. When I heard of this retelling, however, I felt a strong pull toward it. I am not sure why. But, I learned to follow my gut when it comes to books.
9. Morpheus (Splintered trilogy)
Again, I felt like Alice in Wonderland was interesting especially when viewed from a lens that identifies/acknowledges mental illnesses. This retelling sounds like it would have a lot of history and depth. Very exciting.
10. Eon(a) (Eon/Eona)
I think gender is one of those things that were unbreakable growing up. Ironically, I broke it all the time. I spent years dressing up and referring to myself as a boy in response to trauma. I am looking forward to seeing a girl kick butt in a man’s world. Also: the cultural aspects of this novel are compelling as well.