Romance and Sexuality in Pushing Daisies 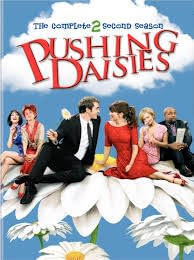 One of my favorite series ever is Pushing Daisies, a show about a pie maker called Ned, who briefly raises people from the dead to solve their murders and bring them justice (and collect the reward, too. That can’t hurt, right?). This is his life until he has to unfold the death of his childhood sweetheart, who he touches to learn about her killers only to realize that he cannot part with her. In doing so, he brings her back to life for good, but with one caveat: he cannot touch her ever again.

The show is sweet and charming. It has bright colors, sweet characters, and a PG plot. What makes it truly fascinating is its contribution to the ongoing conversation about sexuality and romance. In the absence of touchy feel-y moments, the show is surprisingly able to contain enough love to tide its audience over. In fact, it offers a rather satisfactory take on romance, where both parties rely on touching with gloves on, hugging in bulky suits, and kissing with saran wrap.

At a time where sex is presented as a synonym for romance, this is starkly different. Ned, in general, is very shy and, given his background and magical abilities, he is not too crazy about touching people overall. And, Chuck respects that. She doesn’t glamorize his trauma. What’s really cool is that Ned’s powers are treated as very much part of him that Chuck learns to accept, much like someone’s sexual orientation (asexual, perhaps?) and sexual preferences. Yes, Chuck sometimes tries to find physical stand ins so she can pretend to hold Ned while holding their hands. But, she quickly learns that love doesn’t have to be physical.

In a way, the show divorces sex from romance, which opens up the dialogue about sexual orientations and preferences. It frees people and drops the expectation of intense physical contact as part of human relationships. It is the center and forefront relationship, which is quite unorthodox–and it makes the show stand out.