The Spotify Playlist Project: Turtles All the Way Down 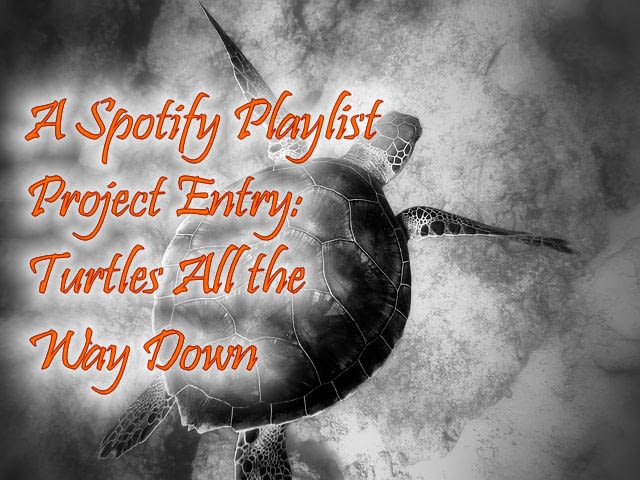 After finishing Turtles All the Way Down, I immediately began to work on my newest Spotify Playlist Project entry. A tumultuous and intense story centered on the mind, I dug through mellow tunes to articulate the feeling of being in that head space.

“Without Lights” by Elliot Moss reminded me of Aza, and her identity, validity, and her ability to go on a quest for the missing billionaire. By the same token, I really like the image of the girl lost in the forest portrayed in the song. It makes me think of Aza’s search for her own mental health coping mechanisms.

“Painting Greys” by Emmit Fenn.  Kind of a Daisy song, but mostly comments on living with OCD as well. “She got my heart in a choke hold.”

“Let You Down” by NF. Aza’s theme, to me, is about her inability to keep her OCD and depersonalization in check. She loses herself often in the metaphors, in the cyclical thinking, and in the impulsive actions driven by her obsessions. “All these voices in my head get loud/I wish that I could shut them out/I’m sorry that I let you down.”

“Easier” by Mansionair is the theme for Aza in her attempts to be with Davis. A song dedicated to her exploration of sexuality and affection under a lens with OCD taints.

“Lost Tonight” by Sa-Je materializes the transcendent lost feeling that Aza has while on the quest for Davis’ father. In addition, Noah’s connection with her is also alluded to here.

There is a specific scene I have in mind for “Yours” by SG Lewis. It involves webcam or FaceTime. The cuteness of Aza read Davis’ blog is also evoked by this song to me.

“Six Feet Under” by Billie Ellish colors in the image of Davis’ father and his fate. I feel like the song has less to do with literal connections, and, instead, it communicates the nature of this man and Davis’ mother.

“Better Off (Captain Planet)” by Ziggy Alberts is the hopeful connection between Aza and Davis, “If I could be your Captain Planet/Would you be my girl.” In a way, the song touches on the scenes with watching the stars and planets, too, and all the moments Aza watches space movies with him. (I love these scenes so much).

“Secret for the Mad” by Dodie Clark speaks to me on an emotional level. I think Aza would like this song on her computer, in a playlist for when things get rough again.

“Moon Song” and “Tonight You Belong To Me” are all about that ending, “…no one ever says good-bye unless they want to see you again.”