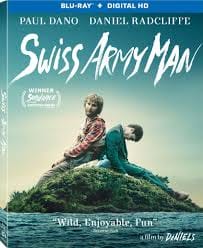 I knew I would love Swiss Army Man from the moment I saw the trailer. Granted, I adore Radcliffe and Dano, but I also loved the tone of the story in previews. What I didn’t expect was a movie  that was so moving and heartbreaking.

Essentially, the film communicates plenty of messages regarding freedom, as symbolized by farts. I know it sounds silly, but sometimes, we need simple ways to convey deep messages.

The way Manny is unrestrained and open is admirable. It’s what literally gets him places. While I partly consider Hank is projecting a bit onto Manny, I do think that his friend reflects his conflicts regarding freedom of expression.

Openness is reiterated throughout the story as Hank teaches Manny about various aspects of life: relationships, emotions, sexuality, pleasure, and self awareness.

Speaking of which, I loved how sex was explored in this movie. It was not a shameful, gross, or primal thing. I am torn regarding how Manny’s penis was used as a compass, because it can be foreshadowing for  Hank’s attachment to Sarah.

On the other hand, the relationship between sexuality and Hank’s stalking relates to innocence because I don’t find Hank and Manny creepy as people. They don’t fetish-ize Sarah or women in general. They don’t turn Sarah into a fantasy. It’s more of a coping mechanism for both of them.

Hank tries to teach Manny about what is acceptable and what is not as Manny posits that perhaps it’s okay to feel caged by these expectations.

Montages depict their developing friendship, particularly when they reenact the bus scenario.

However, what it boils down to is that while we may think of these things, they can be punishable by society. It pains me to see that ending, but I didn’t expect Manny to survive in a world where his farts wouldn’t be accepted and, by extension, his innocence wouldn’t be accepted.

The closer Manny and Hank get, the closer to civilization they find themselves.

Ultimately, it is a fun and thought-provoking story that I am glad to have on DVD to rewatch and analyze.

What is the latest most challenging story you have been exposed to? How did you come to terms with it? Please share in the comments!