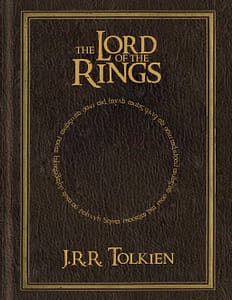 Having just revisited Middle Earth in movie form, it’d be fitting to talk about Tolkien’s work a bit on this blog. His work is valuable and offers great commentary about good and evil, temptation, and grace.

The One Ring represents seduction to the evil of this world. Through it, Tolkien uses allegory to convey the importance of resisting temptations of evil.

Galadriel comes to mind, as she fights the ring’s call. She talks about how she could be a strong and terrifyingly effective queen if she had the ring. “All will love and despair.” It’s fear-based love, painful and anxious. Another example is Gandalf. He is pained when he tells Frodo that he’d not be able to control the ring. While he would be trying to use it for good purposes, it’d warp his power and produce negative outcomes.

Boromir falls into this trap. He is so sure that he’d use the ring to end the upcoming war on Middle Earth. Certain and confident in his own ability to resist it, that he doesn’t even see that thinking this way is a form of falling into temptation’s embrace.

Those who don’t try to hold the ring are rewarded for their actions. Aragorn become a great king. Gandalf becomes Gandalf the White. Sam becomes a hero and gets the girl. Merry and Pip become great warriors.

And, those who hold on to the ring are ultimately destroyed. Frodo and Bilbo are emotionally exhausted. Gollum is literally no longer in this world while the two Bagginses go to “heaven” in this world.

Unlike everyone in the story, Sam is unchanged by the ring, by the journey, and by the peril he encounters. He is the light for Frodo’s growing darkness. Resourceful and hopeful, he practically carries Frodo to Mount Doom.

He never has any desire to try the ring, no intentions or plans with relying on the ring at all.

The question is of whether you think it’s better to be unaffected or worn. Part of me admires Frodo for his brave decision to carry a burden on behalf of so many races in the story: Men, Elves, Dwarf, Hobbit, Wizards.

Ultimately, this story is about temptation and its relationship with good and evil. Somewhat simplistic as an approach, but Tolkien relates goodness with the avoidance of temptation, or at least resisting it. However, to his credit, Tolkien still allows for a complex view of the nature of redemption. Ultimately, Frodo redeems himself by taking the burden and ridding the world from an extreme evil.

What do you think of Tolkien’s depiction of temptation and choice? Share in the comments!