This is Where I Leave You 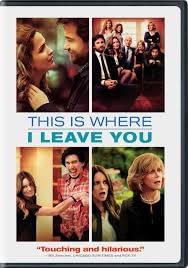 I really, really, really love this story of This is Where I Leave You. The actors are all great, and the story is wonderfully touching. Okay, I will be open to admit that I picked the movie because it has Adam Driver in it, but I ended up liking it for the whole ensemble. Tina Fey is hilarious and so relate-able. It is kind of hard to look at characters individually, because the whole family fits together beautifully.

The refreshing thing is that everyone is messed up in their own way. All the Altmans lost their father, Mort. But they have also lost things on a personal level. Philip is dating his ex-shrink (and loses her eventually). Wendy lost her boyfriend Horry, who got brain damage. Judd’s marriage is in shambles. Paul is losing the family business because his brothers want to be part of it with him. And, their mother has a secret of her own (I won’t reveal it. I’ll try not to).

Humor can act as a way to communicate really complex ideas, and the funny moments in this story are very human and real. There’s no forced humor, really. I mean, yes, there is some (one or two?) moments of toilet humor (I laughed, I am mostly mature, but it was still pretty funny). But, for the most part, when the characters confront one another, or when they have sincere moments of frankness, it is still sometimes amusing. It is not beat-over-the-head type of moral lessons. In fact, the story is more open ended and vague. We don’t get to know specifics about where the characters are really headed. And, for me, that’s quite a relief, because life is rarely not messy and easy to follow.

Complexity is rare in films nowadays, unfortunately, but this film explores the way relationships don’t always make sense (not right away, anyway). And, that makes me love the story so much. I hope you get to check it out.