Some of you may know that I lived in Egypt in the 90s. I was mostly isolated by my mental illness, but even then, I had noticed the prominence of the Si-Sayed figure. What I didn’t ever expect is that this figure appears in Naguib Mahfouz’s 1956 classic called The Palace Walk.

Give This a Listen: Popular Music Around Mahfouz’s Time**

This is a violin cover of the classic Umm Kulthum song called “Enta Omri.” The song is way too long (at least nine minutes long. And, it doesn’t have awesome variety like a Queen song).

Naguib Mahfouz is one of the most famous Egyptian writers. I feel embarrassed for not having read his stuff sooner. Like many migrants, I felt a disconnect from cultures I once inhabited. Anyway, because my Arabic is really weak, I picked up the translated version of the novel.

Much like Dickens’ style of novels, Mahfouz centers this novel on a family of seemingly normal Egyptians. The father, a man named Ahmed Abdel Jawaad, appears to be a pious man who is leading his children to be upright citizens and marital partners. Fearsome when his mood is sour, his wife and children normally call him “sir” or “si-sayed” in Arabic. He is an upstanding trader. However, he is also frequently drunk, flirts and has sex with

Throughout the story, Mahfouz gives a shockingly frank view of Si-Ahmad and his children. In particular, he masterfully untangles the web of colonialism, sexism, racism, and sexuality. 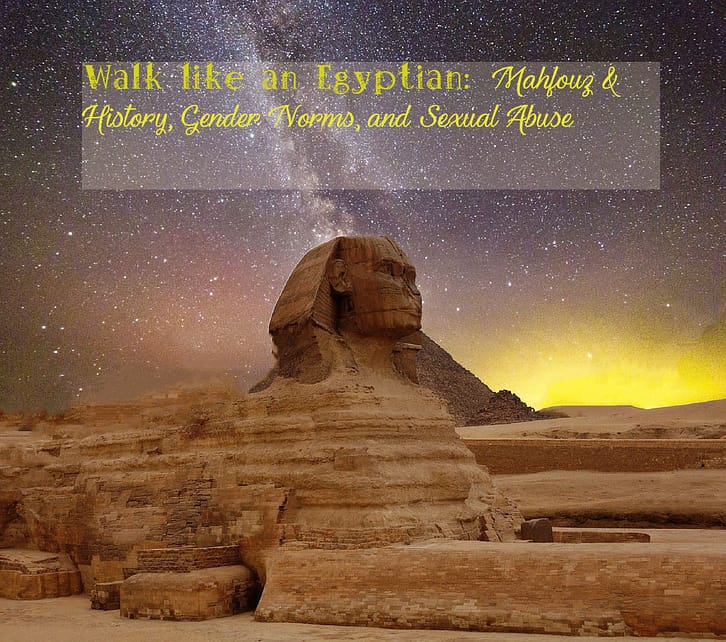 Image courtesy of sciencefreak on Pixabay

The vivacious descriptions of food and culture paint this story in such a powerful way. I haven’t read or heard of ay Egyptian historical references in what’s closing in on two decades. Part of this is because I have been away from that culture for so long. But, to be honest, I think it’s because there was such an intense censorship on criticizing politics or even seeking to understand it and form your own opinion.

Still, it kind of blew my mind to see a revolution unfold while the family tries to maneuver around this growing change. In particular, I thought Fahmy was so tangible and frightening because of my own history in that country. Fahmy is the intellectual and politically-active member of the family. His demise was sadly expected. It falls in line with the message of avoiding politics.

Image courtesy of Free-Photos on Pixabay

The most fascinating parallel is that between Amena, the mother who is second-best for Si-Sayed, and then-occupied Egypt. Both are treated as subservient beings that need to be sheltered from the outside world.

Connecting women and Egypt is a bold move, but it makes sense. Both are occupied by men, who are free to wander and collect as many mistresses as they like–without being questioned, might I add.. It reminds me of all the times I heard the infamous “the sun never set on Britain” because, you know, Britain occupied places all over the world.

But, the abuse is hard to come to terms with. The way Yasin harasses women in the street was upsetting to me. I was mostly in shock when Yasin sexually assaults two of the maids in the family’s home. Even more baffling was the assumption that he somehow needed to get married and somehow his father thought his assaults would stop.  Also, the implied (okay, it was more blatant) racism that is linked to Yasin’s assault of the black maid was upsetting. It’s really upsetting that Mahfouz never seeks to correct this type of perception. I am not asking for much, Mahfouz.

The Palace Walk Geek Out Session on Duality

Dude, I live for fun stuff like this book. Okay. Let me geek out over one more thing. Naguib Mahfouz draws electrifying parallels between characters in this story. I can’t help but grin at the Zaynab and Zanouba connection. Zaynab, who is Yasin’s devout wife, is nothing like Zanouba who is a prostitute. Yet, Si-Sayed’s oldest son oscillates between the two women.

It’s classic whore/virgin dichotomy and it makes my heart sing.

Your Turn: Do you have any classics from another country on your TBR?