Anl.: Pirates of the Caribbean: Find Yourself 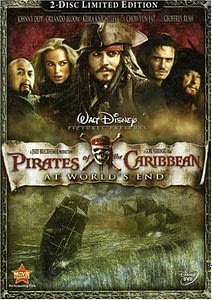 For whatever reason, I was always under the impression that the Pirates of the Caribbean movies are about Jack Sparrow. But, what if the stories are actually about identity, across the board, not just for the pirate? The first film certainly focuses on the journey of all characters towards self-acceptance. I posit that perhaps it is not so much a funny story, too, despite of Disney’s attempts at mocking Jack Sparrow (and I know it gets worse as the movies progress. I remember, distinctly, Jack having multiple eyes drawn on him, and comical music playing the background, as he runs away from some non-white people…which, you know, isn’t offensive or anything. Please note my sarcasm).

So, anyway, the first film introduces the characters, obviously, and in a way, reintroduces them to themselves and to each other. For instance, we begin the story through Elizabeth and Will’s first meeting and the secret Elizabeth keeps from the world regarding Will’s background. From there, the film establishes the connections between the characters (particularly the main four: Norrington, Elizabeth, Will, and Jack). Norrington is hunting down pirates, especially Jack, who is the captain of the last successful pirate ship. The commodore is interested in Elizabeth and wants to marry her. He does not like Will since he can see him as a threat to his relationship with the governor’s daughter. Will is Elizabeth’s love interest. He is the son of one of Jack’s, uh, colleagues. Elizabeth is a means to an end for Jack. Will is Jack’s ticket back to the Black Pearl.
Yet, they are not what they seem. Jack assumes that he is a captain, yet he has no ship or crew. He is rumored to be captain of the Black Pearl, a fictitious ship with a cursed crew. No one believe that this ship exists at all. Throughout the film, Norrington comments on Sparrow’s quality (or lack thereof) as a pirate, calling him, “the worst pirate” he’s ever seen. In fact, the film proposes a question regarding piracy: the rules are complicated and even referred to as “guidelines,” and even the pirates are not all they may seem. I mean, literally: the pirates are the living dead; their identity only shown under the moonlight. Not only that, they break their codes to fulfill their own agendas. Barbossa and the crew’s mutiny is certainly an example of this. Another example of this bending of the rules is when Barbossa betrays Elizabeth (when he first meets her), and Will (when he asks for Elizabeth to be set free).
Jack’s identity as a captain is called into question so many times throughout the first film. An example that comes to mind is when he and Elizabeth are stranded on the Caribbean and Elizabeth asks him how he survived before on the island. He points to the rum as the source of comfort. While Elizabeth gets drunk with him on the first night, she soon realizes that Jack actually didn’t do anything heroic the first time he was left ashore. No getting on sea turtles. No sitting in the water for three days and nights.
Elizabeth pretends to be Bootstrap Turner’s daughter, which is another example of identity being misconstrued in the film. She struggles with being a lady throughout the story. She cannot wear the fancy dresses without gasping for breath. Referring to Will by his first name, and asking him to be referred to by her own first name, she breaks decorum often. In the beginning of the film, she sings of pirates and claims that she’d love to meet one. She is frequently told that marrying Norrington is a good move, however, her attraction to Will puts her in trouble, especially after he is revealed to be a pirate.

The most obvious  identity struggle is for Will–the son of a pirate, working as a blacksmith’s assistant, and yet he is doing all the work as the blacksmith, a fighter, an Elizabeth fan, and a civilian.

It’ll be interesting to see how Elizabeth in particular is treated in the narrative of the next films, because it is very rare to see women presented as more than love interests in pirate films. Wouldn’t it be nice if there were female pirates? Maybe that’s next in Hollywood. One can hope and dream, indeed.

Have you seen the Pirates of the Caribbean movies? Who are your favorite characters? What’s your favorite movie in the quartet? (I am watching them for the first time. So, try not to spoil them too much, savvy?).

2 thoughts on “Anl.: Pirates of the Caribbean: Find Yourself”