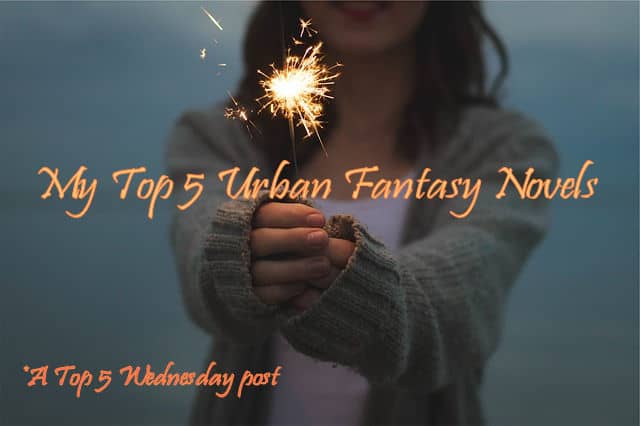 In my early days of reading for pleasure regularly, I was mostly relying on one genre. This genre is, and will probably always be, my safe place. It is urban fantasy. For Top 5 Wednesday this week, the topic is to share our top 5 urban fantasy novels. I am very excited to talk about these books.

5. City of Bones by Cassandra clare

I had read some of Clare’s fan fiction in my early college days. She makes me laugh. Many people do this thing where they list every rumor about an author, every damning coincidence, or every mistake they ever made. When it comes to Cassie Clare, there’s a lot of stigma. Her work is somehow belittled because, oh, it has things in common with other work. It deterred me from reading her stuff for a long time.

However, when I did start reading her books, I was inspired and comforted. It still doesn’t sound like anything I’d ever read. It’s funny, because when I was working on my thesis, it became very clear how derivative literature can be. That’s the fun part. Anyway, this book brings me so much joy.

4. Percy Jackson and the Lightning thief by rick riordan

When I read this book, I was early in my graduate school days. I remember getting it from the library, and simply not knowing how awesome it was going to be. This series is often mocked, too, as you’ll notice a common thread within my post. It got so bad with people calling it “childish” and “unoriginal.”

To me, this series created such a fun and humorous series of adventures, cool characters, wonderful relationships. All of these things were established with the backdrop of rich mythology incorporated into the average daily life.

3. The Spiderwick Chronicles: The Field Guide by Holly Black and Tony DiTerlizi

Another quite rich world presented with a balance between adventure and normalcy. Three siblings go on a quest that is so breathtaking in its richness. I find myself thinking of this series often, particularly how it flows into another trilogy afterwards. With that said, I think the cool feature of this series is how it is accessible to younger readers while not being patronizing to older ones at the same time.

2. The Raven Boys by Maggie Stiefvater

This novel flirts with magical realism, and it makes me happy. To me, one of the features of urban fantasy involves younger characters going on quests despite their age and stature in society. We have Adam Parrish in these books, a poor boy from an abusive family, and he is given so much power and agency. It really is empowering to readers, I find. Same with Ronan Lynch.

But, even more beautiful is the commentary on strength in its varying forms. Sometimes, you don’t really do much to be powerful. Look at Blue Sargent’s abilities, her lineage, personality. Perfection.

Steampunk is hit or miss for me so far. In this story, the main character is witty, with a seemingly normal appearance. Many side characters claim that she is not a conventional beauty due to heritage. And, she is soulless-all powers of the supernatural do not work on her. Romance, intrigue, mystery are all rolled into one delightful candy-like novel.