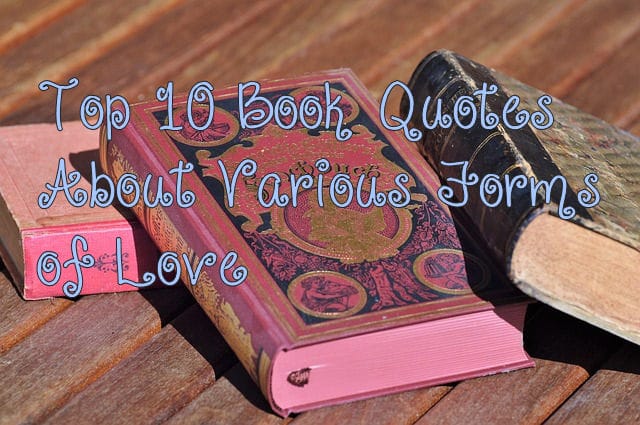 Top 10 Tuesday is now hosted by the lovely The Artsy Reader Girl. It is essentially a weekly topic meant to spark discussion, lists, and excited chats about books. This week is a freebie, but I decided to copy our host. A list of love-related quotes is in order. Let’s go.

10. p.s. i still love you by jenny han–“So much of love is chance. There’s something scary and wonderful about that.”

While I have never fallen in love romantically, I do like this idea of chance in any relationship. I have always been far too anxious to keep any relationship around for long. This quote reminds me of the very scary nature of friendship so much, it validates my pain. To me, I am still kind of in awe of those who have been friends for years, decades, lifetimes. It’s mind-blowing to me. I wish I could have something like that, with friends, that I may rise above the fear and take a chance on people.

9. I’ll Give You The Sun by Jandy Nelson-“Maybe some people are just meant to be in the same story.”

When I read this book, I was really lonely. But, I kept feeling this tug from the universe telling me that you don’t have to let your past relationships go. I conflate confronting my past with escaping it too often, even back then. Funnily enough, this story is about two siblings who are not speaking to each other, which is something rather common in my life, because they come to terms with their differences somehow. Here’s hoping I can make my own peace with my inner demons.

8. the dream thieves by maggie stiefvater–“‘I wish you could be kissed, Jane,’ he said. ‘Because I would beg just one off you. Under all this.’ He flailed an arm toward the stars.”

Their love is so pure and sweet. It was a privilege to read their story for four books. Seriously.

7. The Raven king by maggie stiefvater-“His feelings for Adam were an oil spill; he’d let them overflow and now there wasn’t a damn place in the ocean that wouldn’t catch fire if he dropped a match.”

Come on. Ronan Lynch, who feels everything so intensely, is a wonder to behold. He scared me at first, because I could kind of identify with him. I yearned to be like him in my past. To see him so vulnerable humanized him, made him a small babe that I wanted to protect.

6.City of Glass by Cassandra Clare-““Not everything is about you,” Clary said furiously.”Possibly,” Jace said, “but you do have to admit that the majority of things are.”’

Listen, Jace just sounds like how I make fun of myself. I love Cassie Clare’s writing. She can do no wrong in my world.

5. Fangirl by Rainbow Rowell-“I don’t trust anybody. Not anybody. And the more that I care about someone, the more sure I am they’re going to get tired of me and take off.”

The awkward moment when a fictional character says what is always unspoken for me.

Sometimes, when people know what you mean, it doesn’t really matter how you phrase things. This is a thought that paralyzes me, because I am often hung up on the semantics. I feel things intensely, and I don’t often find the right words or actions to express my feelings and thoughts. I read this book way back in 2012, and I still think about it and about this moment.

3. more happy than not by adam silvera-“The boy with no direction taught me something unforgettable: happiness comes again if you let it.”

Mental illness tells me many things. There are really tough nights, and I think of this book on those nights especially. It’s easily a favorite of mine.

This leads me to:

2. Crooked Kingdom by Leigh Bardugo-“I would have come for you. And if I couldn’t walk, I’d crawl to you, and no matter how broken we were, we’d fight our way out together-knives drawn, pistols blazing. Because that’s what we do. We never stop fighting.”

My tough fighters, Inej and Kaz, are so dear to me. And, as someone who has endured sexual abuse, I identified with Inej and Nina both. Maybe I’ll write about it later. But this post is already long. I like that Kaz and Inej don’t touch. It comforts me a lot.

1. Six of crows by leigh bardugo-“Jesper knocked his head against the hull and cast his eyes heavenward. “Fine. But if Pekka Rollins kills us all, I’m going to get Wylan’s ghost to teach my ghost how to play the flute just so that I can annoy the hell out of your ghost.”
Brekker’s lips quirked. “I’ll just hire Matthias’ ghost to kick your ghost’s ass.”
“My ghost won’t associate with your ghost,” Matthias said primly, and then wondered if the sea air was rotting his brain.”

Because to me, all the interactions between the Dregs is a breathless affectionate whisper. You got to listen to them bickering and see who they become throughout these two books. They are so wonderful, it really makes my heart beat a little faster. Just look at Matthias warming up to them. So good.